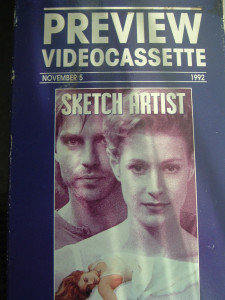 This VHS (a former rental screener) kicks off with a preview for… Sketch Artist. Then the plot begins. Drew Barrymore plays a bike messenger who witnesses a mysterious woman leaving the scene of a murder. The cops make her describe the suspect to the police sketch artist, played by Jeff Fahey. As Fahey sketches, he slowly realizes he’s drawing a picture of his wife (Sean Young). Frantic, he alters the picture at the last minute, so she won’t become a suspect. Later, Barrymore winds up murdered and Fahey begins to think his wife just may be the killer after all.

You know, I watched Sketch Artist 2 a while back as a part of Sequel-Palooza. Now that I’ve watched them both, I have to say that they suffer from the same basic problem. They have a great set-up; but from then on, everything else is pretty mediocre. This one stings a bit more because the set-up is so good (imagine if Hitchcock had gotten ahold of this premise) that it’s especially depressing to see it go into the shitter so quickly. And the predictable ending requires Fahey to act as stupid as humanly possible because if he didn’t, there would be no suspense.

The film is anchored by a good Fahey performance. His character may act like a complete imbecile, but he still gives it 100%. Barrymore fares well with her limited screen time. This was when she was in her transition from bad girl to “actress”, so seeing her in any movie from this era is sorta fun. And Sean Young looks hot and gets naked, so I can’t completely write this movie off.

Tags: .it came from the thrift store, s, thriller
Subscribe