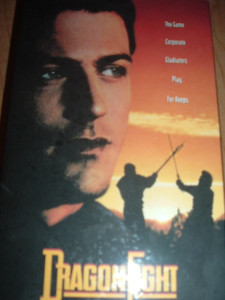 In the not too distant future, the mega corporations own everything. They create a new kind of gladiatorial combat game inspired by an ancient Japanese form of battle. The companies show the fights on TV and make a bunch of money. But during the final match, the American competitor Falchion (Paul Coufos) refuses to fight. By doing so, he could forfeit his corporate sponsors’ investment. Lochaber (Robert Z’Dar), Falchion’s opponent, is goaded into finishing him off, but he goes nuts and starts killing civilians. This finally prompts Falchion to get back into the fight.

I don’t remember what movie it was, but there was an episode of Mystery Science Theater where Joel said, “This movie is just sitting on my head and crushing it”. That pretty much sums up my feelings on Dragonfight. The premise could’ve worked, but Dragonfight’s plot is so muddled and the budget is so cheap that none of it works. I mean if the big fight is televised worldwide, then where are the cameras? And how come the fights supposedly take place in the middle of nowhere, but there’s always some dumb tourist that stumbles upon Z’Dar so he can kill them?

And what the heck was with that mystic sorceress chick in the desert? Apparently she could heal the contestants by using voodoo or something. She did have some rather amazing cleavage though, so I guess I could give her a pass.

The biggest sin Dragonfight commits is that it wastes an awesome cast. We have Michael Pare as the corporate stooge who creates Dragonfight. Even though he’s second billed and has his face on the video box, all he really does is sit around watching TV while frowning a lot. The (usually) great James Hong basically does the same thing as the head of the corporation. The flick also features Charles Napier, but never really gives him anything to do. Plus, it’s a bit odd that George “Buck” Flower’s character just sits around and drinks, but he’s still qualified enough to serve as our narrator!

The only thing saving this atrocious movie from a ½ * rating is the fact that a good deal of it revolves around Robert Z’Dar running around in a chain mail suit of armor. Seeing Maniac Cop dressed as Ivanhoe is one of those sights most bad movie lovers will love. It’s still not nearly enough to save the flick.

Tags: .it came from the thrift store, d, sci-fi
Subscribe