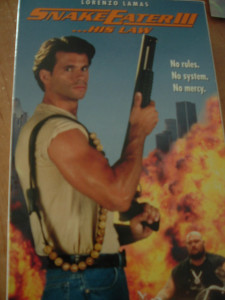 Trailers: K2, Trancers 3, and Time Out: The Truth about HIV, AIDS, and You starring Arsenio Hall and Magic Johnson.

I’m a big fan of the original Snake Eater starring Lorenzo Lamas, but somehow I missed Snake Eater 2. I’ll have to check it out some time. If it’s as good as this one, Lorenzo will be three for three in the Snake Eater department.

Before I begin though, I have to point out that “…His Law” might be the greatest subtitle for a sequel ever. It’s right up there with Electric Boogaloo. Any time you’ve got ellipses in your title, you’re winning in my book. I have a feeling the filmmakers wanted to call it Snake Eater 3: There’s Only One Law… His Law, but they probably decided all of that wouldn’t fit on the marquee.

Soldier Kelly (Lorenzo Lamas) is back. About five minutes into the movie, he gets kicked off the police force. He then gets hired by an old couple to find the bikers who gang raped their daughter and gave her a laundry list of STDs. Solider then teams up with a private investigator named “Cowboy” (so named because of his penchant for wearing cowboy hats) to take down the bikers.

Snake Eater 3: …His Law gets things kicked off with a great opening scene where Soldier foils a diner robbery. It’s not as hilarious as the stakeout scene from the first film, but it’s still pretty badass. Once again, Lorenzo Lamas brings his patented charm to the role of Soldier Kelly. He has an awesome scene in a bar where he mops the floor with some bikers. But Lamas is just as effective in the quieter scenes in the film, like when he tries to unzip his girlfriend’s jumpsuit.

The film has its share of lulls in between the good stuff, but no more than the first flick had. Snake Eater 3 is at its best whenever Lamas is squaring off against the late pro wrestler Scott “Bam Bam” Bigelow, who plays a biker named “Goose”. I won’t spoil his death scene, but it is one of the most inventive deaths I’ve seen in a long time.

Bottom Line: I gotta get off my ass and check out Part 2!

Next week’s movie: Jack Palance in Portrait of a Hitman.