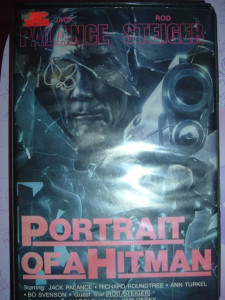 Trailers: Cat in the Cage starring Sybil Danning. You know, I used to have the flick on VHS. I wonder why the heck I got rid of it because Sybil was looking GOOD.

Jack Palance stars as a hitman who paints. His girlfriend is always pissed because every hit is his “last one”. Rod Steiger co-stars as his boss, who hires him to kill a brilliant neurosurgeon played by Bo Svenson. As it turns out, Svenson and Palance are friends from way back when and Jack refuses to go through with his assignment. Naturally, that lands Jack in a heap of hot water.

The best thing about the film is that it kinda has a European flavor to it. From the lighting to the long introspective dialogue scenes, Portrait of a Hit Man feels like an arty kind of action movie. But while the set-up is sound and the lead performances are solid, the flick gets rather dull in a hurry. It also contains too many of the aforementioned long introspective dialogue scenes and not enough scenes of Jack kicking ass.

Jack Palance is pretty good here. Maybe a little too low key in spots, but overall he did some fine character work. Rod Steiger of course, gets a few opportunities to chew the scenery. If he didn’t, then what would be the point of having Rod Steiger in your movie? Bo Svenson and Richard Roundtree don’t fare quite as well in their supporting parts. Roundtree sports a cheesy Jamaican accent and it’s pretty hard to buy Svenson as a neurosurgeon.

Bottom Line: Portrait of a Hit Man is off the mark.

AKA: Jim Buck. AKA: Killer. AKA: The Last Contract.

Tags: .it came from the thrift store, drama, p
Subscribe