IT CAME FROM THE THRIFT STORE: KEVIN COSTNER DOUBLE FEATURE 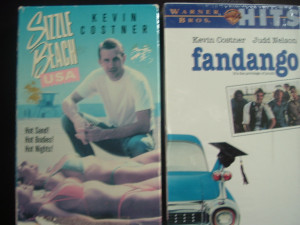 Before the movie begins we get trailers for Valentino Returns and Night Children (starring David Carradine).

Kevin Costner made this skin flick while he was still a struggling actor. After he got famous, Troma released it with his face on the video box. While Costner’s not the star of the movie (he’s given “Special Guest Star” billing”), he’s in it more than you’d think.

Three gals go to stay at a beach house for the summer. One wants to become an actress, one wants to be a singer, and the other wants to be a gym teacher. They all fall in love and have various relationship problems.

Made in 1974, but not released until 1981 (and then again by Troma in 1986), Sizzle Beach, U.S.A. feels hopelessly dated. Most of the time, it plays like a Crown International movie. It also features lots of T& A, although for the most part, the nudity is kinda innocent and tame. Usually, whenever the girls get topless, they’re doing mundane things like riding an exercise bike, making phone calls, or brushing their hair. I can’t lie. All of this has a certain charm about it.

Costner plays a cowboy who falls in love with the actress chick. He’s actually very good in this and gives far and away the best performance of the film. Costner even has a sex scene too, but my favorite scene of his comes when he and a midget get drunk and they go around forcing women to get naked at gunpoint.

Sizzle Beach, U.S.A. isn’t very funny, but the film features so much nudity that I was tempted to give it Three Stars just on skin and skin alone. However, the flick features way too much lame folk music for any sane mind to take. It takes a lot to ruin my enjoyment of the female form and this movie’s rampant use of annoying folksy songs and flower power jam sessions nearly derailed the whole thing.

Steven Spielberg saw Kevin Reynolds’ short film Proof and was so impressed with it that he had him expand it into feature length. Spielberg also produced the flick, but he didn’t like the results so he took his name off of it. He did however use leading man Kevin Costner for an episode of Amazing Stories though.

It’s 1971 and Kevin Costner, Judd Nelson, and a couple of their college buddies have just graduated. Some of them are about to go to Nam, so they decide to take a road trip to Mexico. There, they have various misadventures, try to pick up some women, and convince Nelson to do a little skydiving.

Fandango is fun for a bit, but it’s rambling and episodic to a fault. Some scenes of the friends goofing off are funny (there’s a memorable part where they try to hook their stalled car up to a speeding train). The arty interludes and dream sequences are a bit too hifalutin and more or less ruin the flow of the movie.

Reynolds later directed Costner in Robin Hood: Prince of Thieves. And like Robin Hood, Costner’s accent (in this case, a Texan drawl) is inconsistent. He’s still well cast as the wild man of the group and gives the best performance of the entire film. (Judd Nelson, the nerd of the group isn’t bad either.)

Overall, Fandango is slight, but agreeable. For me, the bombastic Alan Silvestri score is the film’s best asset. It gives the friends’ adventures a larger than life feel; especially during the skydiving sequence.