Well, I told you all that I would be reviewing Bloodsport 4: The Dark Kumite this week; and I would’ve too. Only that when I opened up the DVD box… lo and behold there was no DVD in there! When I buy these things at the thrift store, I don’t always check to see if the movie is in there or not, and sadly, this was one of those times. Such is life.

So instead, this week’s flick is called To Live and Die in Hong Kong and it’s about two sailors in Hong Kong. One is out to bang hookers and the other one thinks he’s a big shot and hangs around with smugglers and criminals and the like. Of course, he gets kidnapped by the bad guys and the other guy has to stop banging hookers long enough to hire a private detective named Horatio Lim to find his lost buddy. 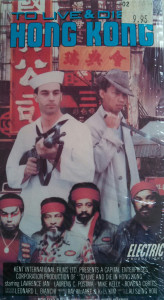 Oh, and in case you’re wondering, none of those guys on the video box appear in the actual movie. In fact, I’m pretty sure the guys on the bottom are members of Tavares with red headbands drawn on their foreheads. I could be wrong though.

To Live and Die in Hong Kong is one of those movies where there is a ton of stuff going on, but nothing ever HAPPENS. There is a subplot involving an Udo Kier wannabe cheating on his wife with his secretary. The secretary is also seeing Horatio Lim, so there’s some business going on with that. Then there’s the long-winded machinations of the bad guy’s plot that goes nowhere. None of this is particularly involving.

We do get some OK Kung Fu action though. Most of it is the usual chopsocky stuff, but every so often there is a nutty scene that makes you chuckle. There’s a part where some gang members in masks snap their fingers in time. One character says, “It’s like West Side Story!” and his friend retorts, “But this is the east side!” We also get a guy with metal teeth who goes around biting people as well as a WTF scene where a scuba diver randomly tosses a hatchet into some guy’s throat. That’s not enough to make the movie, but it does break up the monotony a bit.

AKA: Heroes Three. AKA: Three Warriors. AKA: Hong Kong Caliente. AKA: Backfighter 3. AKA: Hunted in Hong Kong.

Next week’s It Came from the Thrift Store flick: Ninja Phantom Heroes USA!