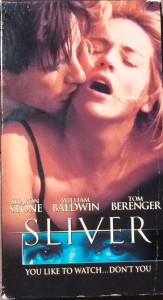 Before the flick starts up we get trailers for Indecent Proposal, The Firm, and Addams Family Values. We also get a plug for the Sliver soundtrack. There’s also a reminder to stick around after the movie for UB40’s music video, “I Can’t Help Falling in Love with You”.

Stone plays a lonely book editor who moves into a swanky apartment building. William Baldwin owns the building and has high-tech video surveillance equipment installed everywhere so he can watch the tenants’ every move. A pushy neighbor, played by Tom Berenger, tries to put the moves on Stone and she brushes him off. Instead, Stone hops in bed with Baldwin, which gets Berenger all kinds of jealous.

Silver also suffers from Been-There-Done-That Syndrome. It was based on the novel by Ira Levin and like Levin’s Rosemary’s Baby, it involves one woman’s paranoia about the neighbors in her apartment building. Also, Baldwin is merely doing a thinly-veiled tweak on the voyeur/creep character he played in Flatliners. Naturally, you feel a little déjà vu from Basic Instinct too because both films revolve around Sharon Stone having sex. Then again, that’s the kind of déjà vu I don’t mind having.

Noyce apes Hitchcock whenever possible, and manages to throw together some nice sequences. I particularly liked the scene where Stone at first shuns Baldwin for his voyeurism and then becomes engaged by it. However, the pacing is often erratic, and the frustrating finale prevents Sliver from crossing over into *** territory.

Tags: .it came from the thrift store, s, thriller
Subscribe