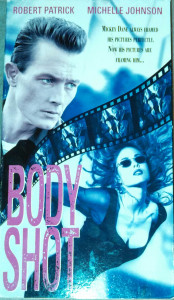 Robert Patrick stars as Mickey, a blond paparazzo photographer who is obsessed with a Madonna-esque starlet named Chelsea (Michelle Johnson from Waxwork). He’s down on his luck and accepts an offer from a sleazy club owner (Jonathan Banks) to do a nude photo shoot of a Chelsea lookalike (also Johnson). Naturally, he falls in love with her and when the real Chelsea winds up murdered, Mickey soon becomes the prime suspect.

The thriller scenes aren’t very involving either. The scenes of Patrick outrunning the cops get repetitive after a while too. The various plot twists that occur in rapid succession in the third act aren’t that great.

The cast is better than the movie deserves. Patrick gives a solid performance and holds your attention whenever the pacing slows down. Johnson is sexy and looks hot during the photo shoot montage sequence. That almost makes up for the fact that she doesn’t get naked during her sex scenes (although she does briefly show off her butt in one scene). Banks plays a good psycho and old pros like Ray Wise, Charles Napier, and Kenneth Tobey also lend fine support.

Patrick gets the best line of the movie when he says, “I came out here with a couple of friends… Jack Daniels and Jim Beam!”

AKA: Framed by Seduction.

Next time on It Came from the Thrift Store: Facing the Enemy!

Tags: .it came from the thrift store, b, thriller
Subscribe