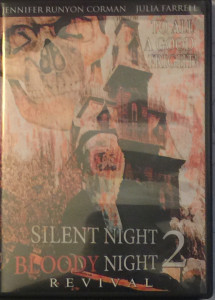 The original Silent Night, Bloody Night is in the public domain, so I guess just about anyone can make their own low budget, shot on video Part 2 if they wanted. Although actually, there’s already a sequel/remake, 2013’s Silent Night, Bloody Night: The Homecoming. So should this really count as Part 3? This is more confusing than the time House 4 got released and everyone wondered what the hell happened to House 3.

Two bickering siblings drive out of their way to put flowers on their brother’s grave. They stay at a bed and breakfast where they learn of Santa Claus’ evil brother, Black Peter. Eventually, people start getting murdered by Black Peter while our heroine learns a secret from her past.

I give the filmmakers credit. Very often I watch a shitty horror movie and say, “I bet I could make a better horror movie than that!” These guys actually went out and did it. Sure, the bar was set awfully low as Silent Night, Bloody Night is one of the worst holiday horror flicks of all time. Sure, this sequel isn’t good, but it’s better than the original and contains at least one or two clever moments before it all turns to shit.

The original was terrible to begin with, so there's no place to go but up. Sensing that, the filmmakers ignore the precedent set by the original and veer into Silent Night, Deadly Night territory for a while with a subplot about a Killer Santa. The filmmakers were also probably inspired by Silent Night, Deadly Night 2 as about a third of the running time is devoted to showing footage from the first movie as flashbacks.

This is basically where everything turns to shit. Sure, I get it. The original is in the public domain, so you can do whatever the hell you want with the footage. However, instead of just using brief snippets as flashbacks, the filmmakers use whole chunks of the first movie to pad out the running time. It’s okay when you’re showing a gory scene or something, but when you resort to showing entire sequences (which were boring as hell the first time around), it just drags everything down.

Again, there is some okay stuff here. I liked the funny pre-title sequence that lovingly recreates the opening of Night of the Living Dead (another public domain movie), but with a drunk Santa Claus instead of a zombie. I also enjoyed seeing Jennifer Runyon, the sexy college co-ed from Ghostbusters, returning to the screen for her first role in twenty-two years as the owner of the bed and breakfast. There was also at least one memorable death scene where a woman gets killed by a snow shovel, falls to the ground, convulses, and accidentally makes a snow angel in the process.

That’s about where the fun ends though. Most of the gore scenes are ruined by some awful special effects (there’s a severed hand that looks like it came out of Spencer’s Gifts). Even worse, some of the kills happen off screen. I guess that is to be expected in horror movies, but I have to call foul when the killer himself gets killed off screen (accompanied by an eye-rolling pun).

Next time on It Came from the Thrift Store: Killer Biker Chicks!