IT CAME FROM THE THRIFT STORE: LEGENDS OF THE SUPERHEROES (1979) ** 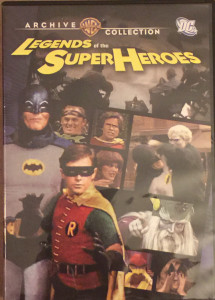 Produced by Hanna-Barbera, Legends of the Superheroes were two hour-long television specials that acted as something of a companion piece to the animated Super Friends show. Since Christopher Reeve was starring on the big screen as Superman and Lynda Carter was on TV as Wonder Woman, their characters are notably absent. At least we have Adam West and Burt Ward reprising their roles as Batman and Robin. If there’s any reason to check out this mess (and frankly, it is a mess), it’s to see them donning their tights once again. We also get to see Frank Gorshin as the Riddler and (briefly) the Batmobile too.

The first episode is “The Challenge” (* ½) and it’s something of a chore to sit through. Batman and Robin, along with Flash, Green Lantern, Black Canary, Hawkman, and Huntress team up to stop a group of super villains from setting off a doomsday device. While the villains hang out on a cheap set, our heroes run around different locations (mostly a gas station where Night Court’s Marsha Warfield cracks jokes about their costumes) and make fools of themselves.

This episode is just painful to watch. If it wasn’t for Adam West and Burt Ward, I’m not sure I could’ve made it all the way through. Sure, who wouldn’t love seeing West and Ward as Batman and Robin again? West still has the charm that made him a legend and Ward looks like he’s having fun, although it’s obvious that he’s more than a little long in the tooth to play Robin. The lone funny scene revolves around the Batmobile breaking down and Batman being forced to buy a used car. Naturally, Batman is more concerned with safety than price, which causes Robin to say, “Holy Ralph Nader!”

While it’s cool seeing West and Ward together once again, I was irritated by the fact that Batman’s cowl looked weird (it’s way too big) and the Batmobile looked like it was covered in cheap primer. At least their scenes are watchable. Everything else is rather unbearable as the annoying laugh track punctuates every single unfunny joke.

The villains are all pretty dire. Sure, Charlie Callas LOOKS the part as Sinestro. However, when he starts doing his usual shtick, it just takes you right out of it. I’m not even going to bring up the scene where he dresses up in drag as an old gypsy woman to throw Green Lantern off his trail. It’s just too painful.

The humor is all juvenile, bordering on infantile. I mean there’s actually a scene in which a villain sets up a lemonade stand to stall the heroes. There’s a difference between “comic book” and “cartoon” and these bozos didn’t know it.

The whole thing looks fucking cheap. It looks like a Sid and Marty Krofft show or something with costumes taken right out of the Salvation Army’s Halloween selection. It’s shot on tape too, so the scenes of the heroes walking around various outdoor locations look REALLY awful.

For DC fans, this will be the ultimate curiosity piece. The presence of West and Ward alone make it worth a look. Everything else just reeks.

When the episode was over, I was kinda glad. I went to turn it off. Then, another episode came on. I didn’t think my mental state could take any more punishment, but I toughed it out.

Thankfully, the second episode is “The Roast” (** ½ ) is a big improvement. It’s exactly what it sounds like, a Friars Club-style roast of the superheroes, hosted by Ed McMahon. It’s a good idea too since the set already looks like a cheesy Vegas stage show to begin with.

McMahon does get a few laughs as he introduces the various super villains and lesser-known superheroes to come on stage and poke fun at the heroes. The most un-PC character is “Ghetto Man”, a black superhero. At first, you might think this is pretty offensive, but it is kinda funny because he takes them to task for not including any black superheroes on the team. (“I don’t see any brothers!”)

Charlie Callas is actually a good fit here because he was a veteran of many roasts. He gets some laughs too. (“He’s so ugly that if it wasn’t for Parkay margarine no one would talk to him!”) Another roast vet, Ruth Buzzi is also on hand playing probably the funniest character, Aunt Minerva, who shows up looking for a husband. When she learns The Flash is “the world’s fastest man”, she says, “Pass”.

Not all of this is funny. The scene of Solomon Grundy (Mickey Morton) beating up McMahon every time he mentions a swamp goes on far too long. The bit where Robin tries to tell Batman he totaled the Batmobile by playing charades is as bad as anything in the previous episode. The final musical number will make your eyes roll too. Still, it’s a vast improvement over the first episode, but the producers were smart to cut their losses when they did.

As far as bad ‘70s TV specials go, Legends of the Superheroes is so bad that it makes The Star Wars Holiday Special look like Roots.

Next time on It Came from the Thrift Store: Mars Needs Women!