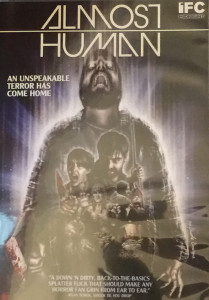 I like the fact that this crop of low budget filmmakers wears their inspirations on their sleeve. They have a Cronenbergian company name, use the same credits sequence font that John Carpenter always used, and swipe a town’s name from a certain Stephen King story. It also takes place in the ‘80s too, which is always nice. Although they can’t quite pull the whole thing off, I’d like to see what they’d be capable of if given a bigger budget and a better script.

One night, Seth (Graham Skipper) sees his friend Mark (Josh Ethier) disappear into a beam of blue light. Two years later, his buddy reappears in the woods, screaming and acting weird. It isn’t long before Seth’s going around town and blowing people away with a shotgun. Since he’s now part alien, he lays eggs in their chests and starts breeding a new race of alien duplicates. It’s then up to Seth and Mark’s old girlfriend (Vanessa Leigh) to stop him from taking over the world (or at least the town).

Almost Human is slightly more competent and a bit more polished than your typical homegrown horror movie. It also has a decent enough low-tech opening sequence, which probably would’ve worked fine as its own self-contained short. At a feature length though, the film doesn’t quite work. Even at a relatively brisk 79 minutes, it still feels heavily padded.

The alien stuff is well done from a technical standpoint given the film’s obvious low budget. (Having the monsters be perfect human duplicates instead of actual monsters really saves on the budget.) Although the flick twiddles its thumbs a bit in the middle section, the third act contains a fair amount of slimy disgustingness. There is one egg-laying scene that is pretty cool. This scene is icky enough to make you wish that the filmmakers had pushed things a bit further into that direction. (More low budget space monster movies need to rip off Xtro.)

In the end, there’s just enough slimy glop and queasy effects for me to let it go with a marginal recommendation. If you’re patient and can get past the talky sections, you’ll be rewarded with some gross gags and effects. You can rag on Almost Human for plenty of things, but at least they didn’t use CGI when it came time for the slimy, sexualized, alien ova-depositors to start squirming around.

AKA: From Another World.

Next time on It Came from the Thrift Store: ATM!

Tags: .it came from the thrift store, a, sci-fi
Subscribe