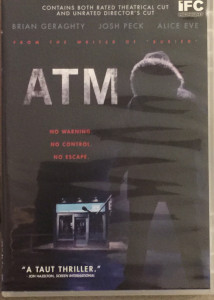 Three stock brokers leave a late night Christmas office party and stop at an ATM. Brian Geraghty is the square, Josh Peck is the cut-up, and the sexy Alice Eve is the unattainable blonde. When they try to get back in their car, they are menaced by a faceless dude in a winter coat who won’t let them leave the ATM. More people show up and they are offed by the killer. Meanwhile, the brokers try to survive the night, using only their wits, but the clever killer is able to stay one step ahead of them at every turn.

The killer obviously saw Urban Legend because he modeled his look on the parka-wearing psycho in that film. Even though his look may be unoriginal, the movie is a rather slick and inventive thriller. The performances by the three likeable leads certainly help as they make you genuinely care for their characters.

Director David Brooks does a good job at setting up the premise swiftly and quickly begins turning the screws to the characters. The clever script also finds some inspired ways to ratchet up the suspense and even though the film takes place primarily in one setting, it never wears out its welcome. While it may never fully kick into gear, it remains a solidly entertaining little flick. As far as Christmas-themed thrillers with characters in claustrophobic settings go, it’s not quite as good as P2, but it’s a fun low-key high-concept chiller.

Next time on It Came from the Thrift Store: Java Heat!

Tags: .it came from the thrift store, a, horror
Subscribe