Trailers: An animated Flash Gordon adventure called Marooned on Mongo (featuring an extremely whiny Flash Gordon) and This Land is Your Land: The Animated Kids Songs of Woody Guthrie! 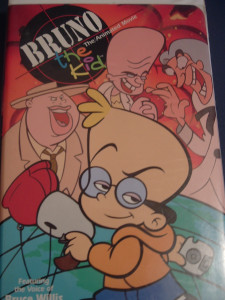 Bruce Willis has made a vanity project or two in his time. His recording debut, The Return of Bruno is probably the most famous, but Bruno the Kid might be his strangest. I love Bruce as much as the next guy, but did the world really need an animated kids show featuring Bruce Willis? I guess he already voiced a baby in those Look Who’s Talking movies, so the idea isn’t THAT strange, but still.

Willis stars as the voice of Bruno, a kid spy. In each episode, he has to save the world from a SPECTRE like group of super-villains. True to his stage persona, his secret weapon is a harmonica which he uses to inflict pain on his enemies. Bruno also has a Q-ish partner who invents gadgets too.

If you think it’s weird that Bruno is a James Bond-like spy; then you obviously have never heard The Return of Bruno. Bruce did a cover of "Secret Agent Man" on that LP. So you see, it makes perfect sense.

Bruno the Kid is basically just three episodes of the short lived series strung together, with a couple of flashbacks from other episodes thrown in there for filler. After a while, the flashbacks start repeating themselves and the running gag of Bruno narrowly escaping danger gets old kinda quickly. But overall, Bruno the Kid wasn’t quite as bad as I was expecting. It’s not exactly good, but there’s some amusing and/or odd stuff here. (Like when Bruno gets his head stuck in a clock face that doubles as a guillotine.) The oddest part about the whole thing though is that Bruce also appears in a weird CGI version of himself that looks like test footage from his Apocalypse video game.

The voice talent is more or less distinguished. Tim Curry and Bronson Pinchot provide voices for two of the villains and Mark Hamill plays Bruno’s assistant. Normally, you’d think having Hamill in this would be a good thing, but his faux-Jerry Lewis voice pretty annoying.

Bartender: “We don’t have any stinking milk!”

Next week brings us one of the oddest double features ever.

The first ten minutes of Netherworld are flat out awesome. In that span of time, the film does for bordellos what Psycho did for showers. Sadly, like your average bordello patron, it shoots its wad way too soon.

The film starts off with a young man going to a bordello to pop his cherry. While he’s led to his room, we keep seeing this damned dwarf with a scary face popping up in the background. Finally, the kid settles on a Marilyn Monroe lookalike (we later learn that she IS Marilyn Monroe) and goes into her room. Then, some sweaty Cajun pops up and sneaks in to the “KEEP OUT” room and finds a sexy witch. When he tries to rape her, a stone hand flies off the wall, grabs his face and turns him into a bird.

Seriously, the atmosphere in this scene is great. The bait and switch of making the audience think the young kid is going to be killed works and the effects for the flying hand are pretty cool (despite the visible string). I also dug the way they made the man-to-bird transformation subtle. The majority of his transformation is out of focus (the camera focuses on the witch while he turns into a bird behind her in the background), but that is more effective because it leaves the bulk of the change to the imagination.

Then once the “plot” emerges, the film goes into the shitter and never quite recovers.

This dude’s dad dies and he inherits his swampland plantation. He reads his father’s journal and based on his half-baked notes, he believes he can bring his dad back to life. Naturally, the witch from the beginning of the flick is the only one who can do it. Finally he goes to the bordello to find the witch and perform the ceremony. Naturally, once he learns that he has to die in order for his dad to be resurrected, he wants no part of it.

The problem with the bulk of the movie is that our hero spends an hour learning about shit we were already privy to in the first ten minutes. There is no suspense in these scenes and the pacing is sluggish. Thankfully, things perk up quite nicely in the finale. (SPOILER) There’s a nice tweak on the usual “Love Conquers All” ending as we get a “Feeling Up the Jailbait Daughter of Your Maid Conquers All” ending. It’s kinda nuts. Too bad the stuff in between the bookends was so dull or this could’ve been a classic.

And yes, that IS Edgar Winter playing in the bordello house band.