Jodorowsky’s Dune is director Frank Pavich’s riveting and exhilarating documentary about one of the greatest cinematic “What Ifs” of all time. Imagine Alejandro Jodorowsky, fresh off the success of the trippy El Topo and The Holy Mountain directed a big budget adaptation of Frank Herbert’s Dune. Imagine if he hired Dan O’Bannon, H.R. Giger, and Moebius to design the special effects. Imagine if he got Pink Floyd to do the soundtrack. Imagine if he got Orson Welles, Salvador Dali, Mick Jagger, and David Carradine to star in it. Sounds fucking incredible doesn’t it?

Just listening to Jodorowsky talk is involving and fun. The man may be in his late eighties, but he has all the infectious enthusiasm of a young maverick filmmaker. Hearing him reminisce about recruiting his creative team of “spiritual warriors” is a real blast. It almost sounds like Yul Brynner recruiting The Magnificent Seven or something.

I’m sure Jodorowsky is viewing the past with rose-tinted glasses. (Some of his stories are probably an equal part legend as they are fact.) In fact, your imagination of what COULD have been trumps what might’ve wound up on screen had he made the movie. That seed of imagination though is what the documentary is all about.

Several people that are interviewed seriously doubt Jodorowsky could’ve pulled off what he wanted to do in the mid ‘70s. Even by today’s technological standards, it would’ve been difficult. One thing is for sure, Jodorowsky is so convinced that he could’ve done it, that you have to give him the benefit of the doubt.

The film as Jodorowsky envisioned it, never happened. The studios were just too scared to take a risk (both in terms of the budget and the temperamental director). Eventually, the film was made by David Lynch, and one of the best scenes of the movie involves Jodorowsky ripping that flick a new one.

Part of what makes Jodorowsky’s Dune so great is that you get to see glimpses of what could’ve been through animated storyboards. It’s no surprise that much of what Jodorowsky tried to accomplish eventually found its way into other big budget blockbusters. After the movie is over, you may find yourself wishing that some producer would give Jodorowsky the money to actually go and make the movie now.

Hazel Motes (Brad Dourif) returns home from The War (they never say which one) a bitter man. He stops believing in God and will stop anyone on the street and tell them all about it if they’re unfortunate enough. When Hazel meets a blind street preacher (Harry Dean Stanton), he becomes further enraged. Hazel then starts a new “church” (The Church without Christ) and begins his own sermonizing on the street.

Wise Blood is a mess. Despite the capable cast, it never comes to life. The reason is because director John Huston handles the subject matter in such a heavy-handed manner that it practically drains just about all of the fun out of it. Huston makes all of his points fairly early on. We learn that even though Stanton is a so-called man of God that he is a charlatan and a crook, and while Dourif is basically an asshole, he at least sticks to his convictions. There is a nugget of an idea for a movie in there, but Huston delivers this message in such a ham-fisted way that it wears on the audience’s patience pretty quickly.

Seriously, there is a reason why the Dueling Street Preacher genre never took off.

Dourif is intense, but his character is so thoroughly unlikeable that it makes much of the film a chore to get through. Same goes for the characters played by Harry Dean Stanton and Ned Beatty. Giving the best performance of the film is Tron’s Dan Shor, who plays Dourif’s slow-witted sidekick. That's still not reason enough to watch it though.

A few weeks back, I was on the DTVC Podcast with Matt and Jamie. They were terrific hosts, and I am gracious they invited me to talk movies with them for an hour or so. In case you missed it, the show is up in its entirety here: http://www.talkshoe.com/tc/134494

Also, I’m heading into the final proofing stage of my first compilation of movie reviews, The Best and Worst of the Video Vacuum. Hopefully, by the end of the month it will be up for sale on Amazon. It’s been a long, strange, difficult, but rewarding process. Even if it doesn’t make a dime, I’m glad I did it. I’ll let you guys and gals know when it’s ready for purchase. Here’s a look at the cover: 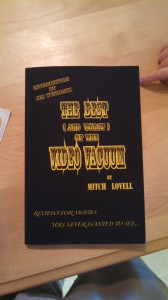