A teenager (Cameron Van Hoy) and his girlfriend (Mischa Barton) find a gun in his mother’s closet and on their way to school, decide to rob a bank. They take hostages, issue threats, and soon, the FBI and their lead negotiator (Burt Reynolds) try and put a lid on the situation. The kids are mostly making it up as they go along; taking their cues from old movies they’ve seen on TV. When they realize they’ll practically get anything they want, the kids demand to be put on MTV and soon enough, Kurt Loder (playing himself) shows up to interview them.

Pups is like a teenage Dog Day Afternoon. Since the teens in question are closer to twelve than twenty, it makes the hostage scenes rather unpredictable. They’re more like children playing cops and robbers than real thieves. That makes the potential for tragedy even greater, but offers the movie a surprising amount of levity and charm too.

The film was written and directed by a guy named “Ash”, AKA: Ash Baron-Cohen, cousin of Sacha. His screenplay doesn’t offer any insights on our nation’s youth, but he doesn’t really need to. He just presents an oddball scenario and lets it loose.

I will say that Ash probably plays his cards too soon. When it comes time for the final negotiation, the movie is already running on fumes. The finale, while inevitable, doesn’t quite pack the intended punch unfortunately.

Still, it almost works. The film is filled with some memorable moments and the interaction between the kids and the hostages is often funny. I liked the wheelchair-bound vet character. While the other hostages try to remain calm, he wheels himself around the bank and goads the kids into taking full advantage of the situation. This is also the only bank heist movie I can think of in which the robbery is stalled when one of the robbers get their first period.

Burt is quite good as the agent in charge of the situation. He gets a few laughs as he struggles to maintain his cool while putting up with the robbers’ childish demands. Loder is also pretty funny playing a dickish exaggerated version of himself. The movie belongs to Van Hoy though. I can’t say you’re rooting for his repugnant character or anything, but he definitely has charisma and holds your attention throughout.

For more Burt Reynolds reviews, check out my latest book, Revenge of the Video Vacuum, for an entire chapter devoted to Burt’s films: http://www.amazon.com/Revenge-Video-Vacuum-Mitch-Lovell/dp/1519142331/ref=sr_1_cc_1?s=aps&ie=UTF8&qid=1484231605&sr=1-1-catcorr&keywords=mitch+lovell 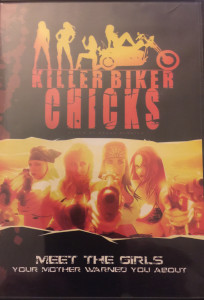 Killer Biker Chicks opens with the dictionary definition of “b-movies”. As if it’s trying to let itself off the hook for containing bad editing, acting, and dialogue. This is one of those wrongheaded throwback pictures that came out in the wake of Grindhouse. These kinds of films only work when filmmakers use the old motifs of Grindhouse cinema to create something retro and cool. Instead, these hacks set out to make a bad movie on purpose, using the fact that most biker flicks are already pretty terrible to begin with as a built-in excuse to suck.

There’s so much wrong with Killer Biker Chicks, so I’ll just hit the highlights (or lowlights as the case may be). The editing is horrible. It cuts to black or slowly fades out after EVERY SINGLE SCENE. They also use EVERY SINGLE FILTER on the camera, which results in a slipshod look. It goes from black and white, to red tint, to video, to negative, usually without rhyme or reason. They really needed to pick a style and stick with it.

The sound is awful too. The audio is extremely loud in one scene and inaudible in the next. In fact, the sound gets so bad that at some points, they have to resort to using subtitles, just so you won’t miss the dialogue (which is moronic, offensive, and just plain unfunny).

The cast is also pathetic. There were only two names in the cast that I recognized. Trent Haaga is a veteran of many Troma movies, but his Troma output looks like Criterion Collection material next to this flick. It was also nice to see the late exploitation legend Ted V. Mikels pop up early on as the owner of a strip club. I wish the filmmakers didn’t give him so much dialogue because he flubs many of his lines. (He does get to name drop The Astro-Zombies in there though.) The Killer Biker Chicks get naked a lot, but that’s about where their talent ends.

What’s probably the most infuriating thing about the film is that the Killer Biker Chicks don’t even get much screen time in their own movie. A pair of comic relief (and I use that term very loosely) cops dominate the screen as they spend most of their time abusing their power while they rape and steal from average citizens. Their banter is painfully unfunny too.

With a budget this low, I was surprised to hear songs like “It’s Raining Men”, “Mama Told Me Not to Come”, and “Born to Be Wild” on the soundtrack. Maybe they blew their budget on the soundtrack clearances. Heck, the whole thing is so slapdash it wouldn’t surprise me if they didn’t pay for the rights to use the songs.

All of this goes on and on for 99 excruciating minutes. The film’s only merit is the rampant T & A. Other than that, I have to say that this is easily one of the worst biker movies I've ever sat through.

Next time on It Came from the Thrift Store: Legends of the Superheroes!