Peaches (Siobhan Hunter) wants to know all about sex, but her parents aren’t much help. When her mom (Tracey Adams) catches her boyfriend (Peter North) spying on her, she forces him to have sex at knife point. Meanwhile, her dad (Herschel Savage) just tells her not to be a tease. So she goes out in the world and tries to learn as much as possible. Peaches has a three-way with a truck driver and a hooker, then watches her uncle (Ron Jeremy) have an incestuous three-way with his wife and son. Eventually, Peaches winds up working in an Oriental opium den/whorehouse where she finally gets the lowdown on how to be a good slut.

Alex de Renzy’s in-name-only sequel to his classic Pretty Peaches is a step down in terms of quality in just about every regard. The sex scenes are uneven to say the least. The early ones are sort of staid, but the film does get better as it goes along. (Well, until the dumb “It was all a dream ending”, that is.)

This compilation of old striptease loops from the ‘60s was included as a bonus disc on The Sexperts. It features eleven cheesecake models showing their stuff for the camera. Any time vintage smut is preserved for historical purposes is a cause for celebration. The clips are uneven, both in terms of sexiness and quality in general, but this will be worth a look for sleaze historians.

“Tina’s Tasty Tease”. (***) Tina, a sexy brunette, lies on a bed and wriggles around before removing her top. Tina has a nice rack and has genuine chemistry with the camera, making this a strong start to the compilation.

“The Bows on Becky’s Bikini”. (**) Becky, a gap-toothed blonde, writhes around on a sofa in nothing but a bikini bottom. Becky’s routine isn’t bad, but every time she smiles, it exposes a dentist’s worst nightmare, effectively losing any potential sexiness this clip might’ve had.

“The Writhing of Awilda”. (**) Awilda, a leggy African-American woman, smokes while she reads some magazines before undressing in her easy chair. This clip isn’t very sexy, mostly due to the erratic camerawork (at one point, the cameraman makes a full charge at Awilda’s boobs) and the fact that she’s mostly confined to her chair the whole time.

“Milky Thighs, Bedroom Eyes”. (** ½) A brunette in a black nightie does a deliberate striptease on a small couch. This segment is pretty funny because they actually left a blooper in there where the unknown model accidentally falls off the couch and starts laughing. That’s about the only memorable part though.

“Wigglin and Jigglin”. (**) A woman in a bad blonde wig rocks her hips on a bed. In addition to her fake eyelashes, obvious tan lines, and several noticeable bruises, the model seems really indifferent, which takes the fun right out of it. (She does have a nice pair on her though.)

“Exploring Barbara”. (***) Barbara, a busty, cheerful model disrobes. Although Barbara is one of the prettiest girls in the collection, the camera mostly lingers on her breasts and crotch. Not that I’m complaining, mind you.

“The Jugs of Jenny”. (**) The enjoyment of this loop is brought down by the way Jenny moves around on the bed. It doesn’t look like she’s trying to titillate you. It looks more like she’s rolling around and trying to get comfortable before going to sleep. Jenny also has some chaffing around her female area, which is a bit distracting too. Plus, although she has some nice jugs, they aren’t really featured prominently enough to earn the title.

“Edwina G. Robinson”. (**) Because of the title, I was expecting this clip to be about a woman dressed as a gangster. As it is, it’s just another one of those kinds of loops where the woman lazes around in a bed and makes little to no effort to titillate you.

“The Fruits of Phyllis”. (***) Phyllis is my kind of girl. She’s more about the “strip” than the “tease”. She takes it off pretty quickly before donning a sheer nightie. I will say that Phyllis has a generous portion of nose on her, but what the way she throws herself into her scene (chomping flowers, spanking herself, pinching her nipples, etc.) is to be applauded.

“Gertie’s Glistening Garter”. (***) Gertie is a bit on the homely side, but she has a quality the other girls don’t have. She looks more like a housewife who got talked into doing this one afternoon after one too many lunchtime martinis. The inventive camerawork also helps (there’s a cool shot between Gertie’s legs as she slowly hikes her dress up) to make this one stand out from the pack.

“Movin’ in with Maggie”. (*** ½) Here’s another one about a cute and pouty brunette. This one follows the tried-and-true tradition of a girl acting “tired” and yawning and stretching like she’s had a long day at work before disrobing. Maggie is super-cute too and breaks character a few times as she giggles at the camera, which is great. The way she flashes the audience teasingly is really something to see. I’d definitely move in with her.

Whoever put Naughty Nudes ’65 together knew what they were doing by bookending the best clips. The compilation ends on a highpoint as Maggie is the cutest and sexiest girl on the whole disc. (She looks like Drew Barrymore a little.) I wish the rest of the collection had more clips of this quality, but there’s enough good stuff here to make it worth a moderate recommendation. (It’s certainly better than the main feature, The Sexperts, that’s for sure.)

The Abomination begins with a greatest hits mix tape of all of the film’s gory highlights (many of which are repeated several times). As it turns out, it was all a dream. (Or was it?)

You see, Cody (Scott Davis) has been going through a lot lately. He’s been worried about his mother who has lung cancer. When she literally coughs up a lung, it comes to life and worms its way into Cody’s mouth. Soon, it takes over his mind and sends him on a quest to feed the ever-growing mass of flesh and teeth more and more victims.

The Abomination was a low budget 8mm homegrown production. The dialogue is often horribly dubbed and the acting is amateurish at best. If you can make it through the slow-moving first half, you’ll be rewarded with a cool monster and ultra-gory kills. The Abomination itself looks a little like the monster in The Deadly Spawn. I liked the way it hid in cabinets, stoves, drawers, beer coolers, and even the toilet (!) before jumping out at its prey. The blood flows freely too as throats are slashed, hands are chopped off, and brains are chainsawed out.

I also liked how the movie freely borrowed from other horror films of the time. The way Cody finds food for The Abomination is not unlike Seymour in Little Shop of Horrors. Our hero also keeps pieces of himself in the medicine cabinet, just like Jeff Goldblum in The Fly. The monster-in-the-toilet scene is also a little reminiscent of Ghoulies.

The heavy padding in the early going really hurts the film’s overall momentum. I really wished they didn’t show us all the good stuff in the beginning because it ruins all of the gore scenes later in the movie. Then again, the first half is so sluggish the filmmakers probably felt they had to show the audience the goods early on to keep them in their seats during the slow parts. As it is; the flick just about (but not quite) skates by on the gore alone. 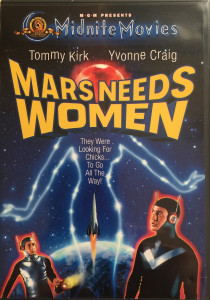 Women of Earth start disappearing mysteriously. The U.S.’s top military brass decodes a message from space that reads “Mars needs women!” It seems that the male to female population on Mars is 100 to 1, and since Mars needs women, it’s up to Tommy Kirk and Martian pals to arrive in Houston to bring home some prime specimens. Of course he falls for a pretty scientist played by Yvonne (Batgirl!) Craig (who wrote a book called “Sex in Space”), which complicates his mission.

This is far and away Larry Buchanan’s best movie. It starts out great with shots of women disappearing via a jump cut (including one in the shower) before bogging down at around the twenty minute mark. (Buchanan had to pad out the film so it would fit in a television time slot.) If you can get past the long stock footage scenes of jets taking off and landing and the overused shots of an intercom barking out orders, you'll be treated to some entertaining hokum.

For one, the Martian ship is a hoot. It looks like a smokeless ashtray. It’s also fun seeing Buchanan reusing several actors and locations from his Attack of the Eye Creatures. Speaking of locations, he gets a lot of mileage out of a hotel room, a strip club, and a community college (which doubles as top secret military installation). The limited locations give the whole thing a home movie kind of vibe.

Kirk, it must be said, was never better. He gets a truly wonderful and strangely moving scene where he takes Craig to a planetarium that is putting on a Mars show. When the tape breaks halfway through the presentation, he picks up where it left off, shocking the rowdy kids in the audience into a state of silence. His impassioned and tender soliloquy about his dying planet is terrific. There is definitely more heart here than countless other sci-fi movies with a hundred times its budget. His farewell to Craig (who is also quite good) in the end is well done too.

Bottom Line: If you only see one Larry Buchanan movie in your lifetime, make it this one!

Next time on It Came from the Thrift Store: Starry Eyes!