Lau Xing (Jackie Chan) steals a jade Buddha from the Bank of England and poses as a valet to make his escape. Eccentric inventor Phileas Fogg (Steve Coogan) hires him, mostly because he needs someone to test pilot his inventions. When Fogg presents his findings to a council of scientists, he’s almost laughed out of the room. He makes a bet with them that he can circle the globe in eighty days. Since Lau wants to return the Buddha to his village in China, he agrees to go with him. Along the way, they run into various authority figures, not to mention a gang of Chinese warlords, who are trying to retrieve the jade artifact.

This adaptation of the beloved Jules Verne novel is an odd duck. They’ve gutted a lot of the novel to make room for a Jackie Chan comedy vehicle. It’s more of a kids’ movie (it was released by Disney) than a real Jackie Chan flick, so the action is overly slapstick-y and the jokes are obvious, broad, and not very funny.

This is one of those revisionist deals like The Lone Ranger where the ethnic sidekick gets more time to shine than the actual hero. This isn’t a bad idea, since after all; this is Jackie Chan we’re talking about here. Since this is an expensive, overlong, and gimmicky kids’ movie, the action sequences weren’t exactly a main priority.

It was directed by Frank Coraci, a veteran of many Adam Sandler movies. That is to say, he’s not the sort of guy you want behind the camera directing Chan. The fight scenes have potential, but nearly all of them fall flat. Take for example the fight in an art gallery where Jackie and his assailants get paint everywhere while fighting and accidentally make a work of art in the process. Although the bare bones of a great scene are there, Coraci doesn’t have the chops to make it work. The finale, which takes place inside the under construction Statue of Liberty is slightly better.

Like the 1956 version, there is a cavalcade of cameos, the most notable being Arnold Schwarzenegger as a Turkish prince who wants to steal Coogan’s girlfriend. While it’s cool seeing two titans of action cinema such as Chan and Schwarzenegger finally on screen together, I wish the film found something more for them to do together besides share a hot tub. I also wish Schwarzenegger had funnier dialogue besides calling Fogg “Foggy”.

Sammo Hung also shows up playing Wong Fei Hung, although he isn’t utilized to his fullest. We also get Rob Schneider (as a bum), John Cleese (as a bobby), and Kathy Bates (as the Queen). The best cameo is by Owen and Luke Wilson as the Wright brothers. They bring a comedic spark that’s lacking throughout the rest of the picture. You almost wish they had their own spin-off.

You expect certain things from a Jess Franco Women in Prison movie. Barbed Wire Dolls pretty much delivers in that regard. There are long stretches where the camera zooms around aimlessly. There are long scenes of naked women being tortured. There’s a gratuitous Franco cameo. There’s a scene where a woman rubs her pussy with a cigarette.

You know; the usual.

You know you’re in for a treat once you meet the warden. What I like about her is that she rules the prison for the mentally insane and never once wears pants. Instead she wears a khaki military top and a black bikini bottom. It’s almost as if you can see the glass ceiling being shattered before your very eyes.

My favorite part was when Romay has a dream of her father (played by Franco) trying to rape her. Again, the budget was so low that they couldn’t afford slow motion, so both of them just run around really slowly and pretend they’re in slow motion. It’s fucking hilarious.

Franco and Romay were a couple, so it gives this scene an added layer of creepiness. I mean you have your boyfriend playing your dad who’s trying to rape you. Ah, show business.

Let’s see, what else. Oh, Romay finds a mouse in her food at one point. There’s some tickling torture, which should please a few fetishists out there. We also get a scene where the warden molests a supposed virgin inmate and says, “Someone’s already stolen this cherry!”

This collection of scenes alone is worth ** ½. It’s just a shame that once the girls escape, the movie becomes a slog. You’ve got to deal with long scenes of them running through the brush, the warden barking out orders, and put up with the obvious twist ending. Whenever the Barbed Wire Dolls (I don’t think there was any actual barbed wire in the film, but never mind) were behind bars; it’s damn good times.

Too bad the third act is so snore-inducing. I mean if the girls rose up against their captors and dished out some gory revenge, it might’ve worked. As it is, they just sort of run around aimlessly. If Franco had a little bit more exploitative goodies in reserve for the third act, it could’ve been a winner. As it is, the flick just runs out of gas a good twenty minutes before the finish line.

AKA: Women’s Penitentiary 4. AKA: Jailhouse Warden. AKA: Caged Women. AKA: Woman Caged. 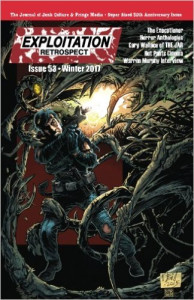 I was very happy to contribute a few reviews to the latest issue of Exploitation Retrospect. I am in terrific company as some of the other contributors are writers I respect and admire. Thanks again to Dan Taylor for letting me help out.