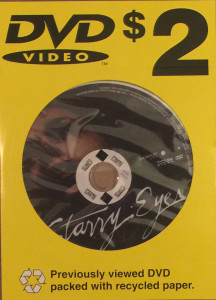 Before the DVD starts up, we get a couple of trailers. First up is Summer of Blood, a vampire comedy, followed by LFO, an odd looking thriller about sound waves, and finally Late Phases, a blind man vs. werewolf movie that looks pretty badass. Then the movie begins.

Sarah (Alexandra Essoe) is a waitress with lofty aspirations of being an actress. She goes on many auditions and often goes completely bonkers when she doesn’t get the part, usually having hysterical fits that culminate in her ripping large chunks of her hair out from the root. One weirdo casting agent notices one of her outbursts and she receives a callback based on the strength of her crazed antics. Sarah gets to meet the bizarre producer of the film who forces himself on her in exchange for a role in the movie. She then embarks on a slow and painful transformation from up-and-comer to ingénue starlet.

Starry Eyes is similar in some ways to The Neon Demon, although it’s not nearly as stylized. The first half of the film contains very few horrific elements, so you have to be patient to get to the good stuff. It’s deliberately paced, but there is a certain level of dread that builds up as it progresses.

This is sort of one of those throwback horror movies like House of the Devil. It uses a cool ‘70s font for its title sequences and wears its inspirations proudly on its sleeves. (The pacing is a lot like Polanski, the music sounds inspired by Carpenter, and the big transformation feels like something out of a Cronenberg film.) I can’t say it’s entirely successful. The second act dawdles, although the eventual revelation of what’s happening to Sarah is well done.

I just wish there was a bit more to the ending. Having the whole thing boil down to Sarah being forced to… well… I won’t tell you… in order to become a star feels awfully small. Still, when the film works, it works. (The final transformation scene is rather effective.) I liked it better than The Neon Demon, that’s for sure.

Next time on It Came from the Thrift Store: Golden Killah!

Ryan Gosling wants to save jazz. He’s so into jazz that when he gets a gig playing Christmas music in a restaurant, J.K. Simmons fires him when he’d rather play jazz than “Jingle Bells”. (He must’ve been rushing and/or dragging.) Emma Stone is a bad actress who wonders why she can’t get a part. (Or rather she plays a bad actress who wonders why she can’t get a part.) They wind up meeting and falling in love and Gosling pushes her to pursue her passions, even though she’s borderline mental and stuff. When she has a choice between Gosling and going to Paris to be in a movie, she drops him like a bad habit and winds up marrying the American Werewolf in Paris. When the Werewolf takes her to a jazz spot, lo and behold, Gosling owns it, and instead of thanking him and stuff for the inspiration, she just walks out on him without a word.

Hey, we’ve all been there.

La La Land is a musical. It’s getting lots of attention because it’s a musical and they don’t really make musicals any more. You can see why they don’t. Since they haven’t made a musical in a while, the rust really shows. All the song and dance sequences are staged like Diet Coke ads. You keep expecting them to say “Just for the Taste of it!” after every performance. In fact, I’m positive they could’ve cut all of the musical numbers and it would’ve been much better.

Gosling is pretty much the only reason you remain invested throughout. There’s a funny bit where he’s stuck playing in an ‘80s cover band to pay the bills and has to jump off stage and explain to Stone that he still has musical integrity despite the shitty music. I also loved the part where he gets a gig playing in a crappy nu-jazz band and swallows his pride in order to pay the bills. The face he makes when the band starts playing an atrocious auto-tuned version of his beloved music is pretty hilarious.

Stone’s character is super annoying and drags the whole thing down. I mean, Gosling stopped doing what he loved, swallowed his pride, comprised his artistic vision by performing music he loathed in order to put food on the table, and gave up his own dreams to encourage her to follow her dreams, even when no one else (most of all herself) believed in her. What’s he get for all that? The indignity of having to watch her marry the American Werewolf in Paris. There’s a lesson here. Never trust a woman, ever, or she will break your heart and leave you for the American Werewolf in Paris.

The DVD for American Pop boasts that it features music by “Jim Morrison, Jimi Hendrix, Janis Joplin, and Lynyrd Skynyrd". What it doesn’t tell you is that you have to wait for over an hour until you get to them. You’re better off just listening to the classic rock station for ninety minutes and save your eyes from seeing all the shitty animation.

American Pop is a Ralph Bakshi movie, so you know the animation is going to suck. I will say that this is some of his best animation. That is to say that he just filmed scenes with live actors and traced over their bodies to make it look like animation. You know, cheating.

I’ve sat through some bad Bakshi movies before, but this one might be his worst. It follows four generations of lowlifes and degenerates as they try to get a piece of the American pie. In the end, our drug dealing hero, whose family members have included gangsters, drunks, and dope addicts, finally makes it big by writing and performing a Bob Segar song.

Are we supposed to cheer? Are we supposed to care when a character we hardly know is rewarded for a life of selling drugs by becoming a superstar? What’s the message? Sell all the drugs you can and one day you’ll be rewarded with fame and fortune? I don’t get it.

None of the characters are remotely likeable. The pacing is also erratic, sometimes skipping ahead several years and/or decades, leaving the audience in the dust. It’s also episodic to a fault. The music is the sole saving grace, although, like I said, you have to wait a long time to get to the good stuff.

All in all, American Pop is a bust.