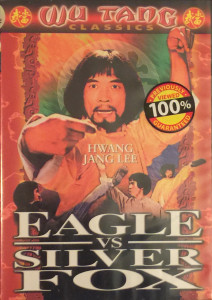 The awesome “King Bootmaster” Jang Lee (Ring of Death) Hwang stars as the evil Silver Fox. He orders the death of a group of men on a raft. The lone survivor manages to float downstream where he is rescued by a kind, but sickly monk. He nurses him back to health and teaches him Kung Fu. After his master’s death, our hero then teams up with a female pickpocket and a crotchety old man (who calls everyone “whippersnappers”) to aid him in his quest for revenge.

Although Hwang played the character of Silver Fox in the Secret Rivals series, it doesn’t appear that he’s playing the same Silver Fox in this one. Since the flick was directed by Godfrey Ho, we can probably assume that he was just cashing in on the name. Speaking of Ho, this is the third Godrey Ho film I’ve watched for this column (after Fist of Golden Monkey and Incredible Shaolin Thunderkick), which makes him the unofficial King of the Thrift Store movies.

Ho gives us a lot of flashbacks, which makes the plot play out a in a more interesting fashion than if it was played straightforward. It’s still not enough to keep it from bogging down during the dialogue sequences. There’s a decent amount of action, and while it’s good as far as Ho is concerned, it never really (pardon the pun) kicks into gear either.

We do get some quality fights though. I liked the fight in the restaurant where our hero throws food in people’s mouths, rips their hair out, and tosses a guy UP the bannister of a staircase. The mean old guy also gets a good training scene where he keeps hitting the pickpocket lady in the face with a spoonful of rice. The best training sequence though comes when our hero uses a scissor kick to chop a tree down. These moments help to keep the flick from being just another Kung Fu flick, but ultimately it’s missing the WTF magic of Ho’s zaniest stuff.

Next time on It Came from the Thrift Store: Fantastic Dinosaurs of the Movies!

A masseur is unhappy in his profession. He’s growing tired of massaging fat guys for little pay. When some customers give him some lip, he starts an all-out brawl in the bathhouse. He quits his job and offers to be a tubby guy’s bodyguard. A hitman comes to kill him and when the masseur sees how badass he is, he lets the fat guy be killed so he can pledge allegiance to the assassin. The masseur winds up going to jail, but eventually escapes with the help of the assassin. Their friendship grows when the masseur meets the hitman’s blind sister. He then agrees to help him get enough money for an operation to make her see again.

A Hero’s Tears has a good rhythm early on. The bathhouse fight is full of guys in tighty-whities getting their asses kicked accompanied by comic sound effects and shots of them landing on each other in compromising positions. As far as comic relief fight scenes go, it’s pretty funny. The novel setting also helps make it stand out from similar comic scenes and it actually contains a laugh or two.

I also appreciated the fact that our hero is more or less a coward. The way he threw the fat guy under the bus was good for a laugh. Sadly, once he begins hanging out with the assassin, the whole thing slows down to a crawl. The stuff with the blind sister is equally sluggish. After that, the movie never recovers.

Some fights scenes have lots of blood and others contain plenty of explosions and smoke bombs. However, nothing can really top that bathhouse scene. Although the fights in the third act are decent (I dug the bit where the assassin chopped a guy’s hand off), they pale in comparison to the opening sequence. It’s not terrible or anything, it’s just that no matter how hard it tries, A Hero’s Tears is never is able to duplicate the momentum (or fun) of the first act.

Hangar 18 is a sci-fi movie in the vein of Capricorn One. As with that film, it’s more of a conspiracy thriller than a legit space flick. At least this one has actual space flight and aliens.

James Hampton and Gary Collins are astronauts whose ship collides with a UFO. They arrive home and find their story has been completely discredited by the government. Meanwhile, NASA head Darren McGavin is fiddling around with the spacecraft in the titular hangar. Gary and James try to head on over there and find out what’s going on when they are pursued by government agents who want to silence them forever.

The scene where the aliens crash into the ship is pretty cool. One of the astronauts loses their head, literally. The sight of the headless corpse and decapitated head floating around in space is the only worthwhile part of this boring slog. After that, it's all downhill from there.

From then on, our time is split between Hampton and Collins eluding agents and Robert Vaughn trying to keep the lid on things. It doesn't help that a talk show host and Teen Wolf’s dad don't make for very good action heroes. You know it’s bad when the usually interesting Vaughn and McGavin aren’t given anything worthy of their talents.

The worst part is the end when the government orders the hangar bombed. It would've been an okay downbeat ‘70s type of ending, except they chicken out at the last second and give you a happy ending. That would’ve been fine if they actually filmed the damned ending. Instead of filming a resolution to the matter we just hear a narrator say everyone survived the blast and the world now knows about aliens. Weak.

AKA: Invasion Force. AKA: Space Connection.