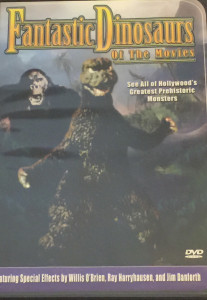 Fantastic Dinosaurs of the Movies is a bit of a hodgepodge. The bulk of the running time is devoted to old movie trailers, but the first fifteen minutes or so is kind of all over the place. Things get off to a cool start with the Goodtimes logo being projected on an old school TV with a top-loading VCR. The TV turns on and we are treated to a brief segment in which stop-motion movie theater patrons watch clips of old dinosaurs movies. Then a narrator gives us some factual information about dinosaurs using clips from such films as Gertie the Dinosaur, The Lost World, and Godzilla as illustrations.

The coolest part though is the vintage behind the scenes documentary of Ray Harryhausen hard at work on The Golden Voyage of Sinbad. In addition to seeing Harryhausen working on the monsters (along with clips of some of his coolest monsters), we get to see snippets of John Phillip Law and Caroline Munro filming live on location. When she’s not busy filming, Munro takes some time to do some cheesecake photo shoots on the beach, and let me just say… GROWL!

From then on, the flick becomes just another trailer compilation. Many of the movies wound up on Mystery Science Theater 3000, so fans of MST3K will probably get a kick out of it. If I’m being perfectly honest, the flick plays fast and loose with the whole dinosaur theme. Sure, there are plenty of dinosaurs on hand, but the compilation is padded out with lots of giant spiders, squids, and bugs. A more honest title would’ve been Fantastic Monsters of the Movies. I’m not complaining though because this collection gives you a nice balance of special effects from stop-motion to men in bad rubber suits to forced perspective pet reptiles.

I mean how can you complain when you get trailers for Journey to the Beginning of Time, The Lost World (1960), King Dinosaur, The Giant Behemoth, Earth vs. the Spider, The Giant Gila Monster, The Loch Ness Horror (“At last, the world’s most treasured story comes to the screen!”), The Land That Time Forgot, Jack the Giant Killer, It Came from Beneath the Sea, Them, Valley of the Dragons, Godzilla, King of the Monsters, The Giant Claw, Tarantula, 20 Million Miles to Earth, Godzilla vs. Mothra, Journey to the Center of the Earth, The Crater Lake Monster, The 7th Voyage of Sinbad, Rodan, The Beast from 20,000 Fathoms, Reptilicus, The Land Unknown, Jason and the Argonauts, Ghidrah the Three-Headed Monster, At the Earth’s Core, Valley of Gwangi, Gorgo, King Kong, Son of Kong, King Kong vs. Godzilla, One Million Years B.C., and When Dinosaurs Ruled the Earth.

Join us next time on It Came from the Thrift Store when our movie will be Almost Human!

A pair of robbers and rapists are hired by a devious brother and sister team to sneak into a palace and steal some gold. Meanwhile, a girl disguises herself as a man in order to get close enough to stop them. A guy with a metal face called “Devil Man” and his army of zombie fighters joins the fray, and eventually, some dude calling himself “Superguy” steps in to save the day.

I had a hard time understanding some of the plot because the sound kept going in and out throughout the running time. Just when I’d raised the volume up enough to hear it, the sound would come back to full-blast and it nearly blew my speaker out. Usually, this wouldn’t be a problem if there was a subtitle option, but there wasn’t.

Not that plot is essential in a Kung Fu flick. However, there’s so much double-crossing, dirty dealings, and scheming going on between the characters that it’s hard to keep track of who’s doing what to who. I guess it wouldn’t matter if the action was solid. As it is, the Kung Fu isn’t anything to write home about. With the exception of the scene involving a blindfolded woman kicking plates off a guy’s head, the action is rather weak. The finale, which involves a lot of bad guys running around in fast-motion, is pretty stupid too.

For a movie named “The Invincible Sugerguy”, we don’t see a whole lot of him. When he finally does show up, it’s too little too late. I realize the filmmakers were probably just trying to cash in on the success of Superman, but there’s absolutely nothing “Super” about this guy, or the movie.

Producer Roger Corman’s Attack of the 50 Foot Cheerleader is not only derivative of Attack of the 50 Foot Woman, but also The Amazing Colossal Man (there’s a scene involving a giant syringe), Attack of the 60 Foot Centerfold (the giant-sized catfight), and Corman’s own The Wasp Woman (a beauty cream has Sci-Fi side effects). Corman, ever the penny-pincher, gave the effects team a budget so low that they have to resort to using the same techniques from the '50s to make the cheerleader look huge. Sure, there are a few CGI touches, but they are few and far between.

The plot I guess is pretty self-explanatory. Jena Sims is an ugly (and by “ugly” I mean she’s a hot coed that wears glasses, doesn’t wear make-up, and doesn’t comb her hair) science major who unsuccessfully tries out for the cheerleading squad. When she uses a sample of a top secret prototype skin cream, it makes her beautiful (and by “beautiful” I mean she stops wearing her glasses, puts on some make-up, and combs her hair), but it winds up turning her into a fifty-foot tall freak.

The cast is pretty good for this sort of thing. We have Sean Young as Sims’ mother, Ted Raimi as a lab assistant, and Treat Williams as the head of the top secret project. Williams does go overboard with his hammy performance (I would've preferred it if he was at the level of cheesy acting that he brought to The Phantom), but it’s still fun seeing him playing scenes alongside Raimi. It’s also cool seeing John Landis and Corman himself popping up in extended cameos.

I’m guessing this was original filmed in 3-D because there are lots of scenes in which the actors shove stuff at camera. Since the version I saw was in 2-D, it grows tiresome. It sometimes feels like that old SCTV sketch, but you know, minus the laughs.

Yes, sad to say that despite the solid premise and game cast, Attack of the 50 Foot Cheerleader is mostly a bust. On the plus side, there is a lot of nudity, so that keeps you watching. The final catfight between the two fifty-foot pom-pom girls is good, but it’s a long time coming.

Claire Wilbur and her hubby are bored with swinging with tourists in their island villa. So she invites Lynn (I Drink Your Blood) Lowry over and seduces the telephone repairman while she watches. Claire then has Lynn and her husband over for dinner. They have a dress-up party, get high, and break off into same-sex pairs for a night of forbidden desire.

Radley (The Image) Metzger’s Score is groundbreaking in terms of the sheer amount of homosexual content. Sure, we’ve seen plenty of girl-on-girl action in these sorts of movies, but rarely do the guys get a chance to explore and fool around a little. For that alone, I guess Score is worthy of at least some kind of footnote in skinflick history.

It doesn’t help that the plot is slow moving. You can tell it was based on a play because it’s filled with longwinded scenes of people yakking on and on. The problem is, once we finally get to the sex, it isn’t really all that titillating.

Another odd thing is the fact that the guy-on-guy stuff is hardcore, but the lesbian scenes are strictly softcore. I mean what was good for the goose should’ve been good for the gander. Admittedly, the guy-on-guy stuff didn’t do much for me, but even the lesbian scenes fall well short of Metzger’s best stuff. While I’ll never turn down a chance to see Lynn Lowry strutting her stuff, in the end, even her scenes left me a bit cold.