In the futuristic year of 1940, another World War breaks out, causing devastation throughout the globe. In 1966, a deadly plague further culls the population. In 1970, a man in a plane touches down near a settlement and is immediately taken hostage by the suspicious warlord who controls the town. Eventually, his organization, “Wings Over the World” bombs the town and begins to make way for the futuristic society of 2036.

Directed by William Cameron (Invaders from Mars) Menzies and boasting a screenplay by none other than H.G. Wells, Things to Comes is a fascinating, if flawed film. It’s more speculative fiction than science fiction, but it’s interesting to see what Wells and company predicted would happen in the future. They accurately predicted another World War would occur, they just got the duration wrong. They also predicted the advent of flat screen TVs, and the giant underground society of the future looks a bit like a modern day shopping mall.

Things to Come doesn’t really have a traditional narrative. It doesn’t so much follow characters, but rather gives you glimpses into a futuristic time. While I do appreciate this novel approach, the whole thing is dramatically uneven. The earlier scenes of the world on the brink of war are much more effective than the stuff involving the post-plague society.

Some of the character’s musings on war is a bit too on-the-nose. (“If we don’t end war, war will end us!”) The acting is a bit stilted and/or overly theatrical too. That’s sort of the point though as the movie seems to be a propaganda film from some kind of futuristic alternate reality.

Menzies’ framings and compositions are larger than life. The set design is stunning and some scenes feel almost like a nightmare. The bombing sequences that show the mass destruction of the city are well done. I also liked the scenes of people being shot down for having the “wandering sickness”. You have to wonder if maybe George Romero took a cue from this movie as this section sort of feels like the “Shoot them in the head” scenes in his zombie films. 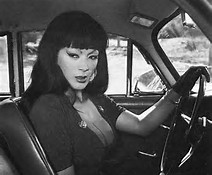 If you all have the time, the great Cody Jarrett needs your help to finance his documentary on the iconic Tura Satana, star of the legendary films Faster, Pussycat! Kill! Kill!, The Astro-Zombies, and Sugar Boxx. Not only that, but it includes an appearance by the always entertaining John Waters too! If you're a cult movie fan like I am and have a few dollars to spare, help Cody out!